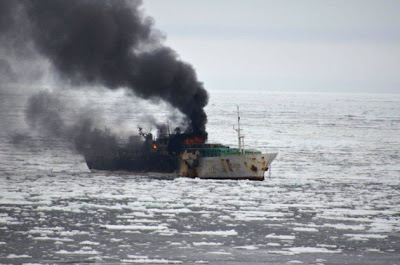 WELLINGTON, New Zealand (AP) — Rescue officials say a U.S. Air Force plane will airlift seven crewmen burned in a raging fire on their ship near Antarctica that killed three other fishermen.
They say the plane will leave New Zealand on Thursday and fly to Antarctica to pick up the four Vietnamese and three Indonesian crew.
The fire on the South Korean ship Jung Woo 2 quickly spread despite the crew's attempts to fight it Wednesday. Thirty-seven crew members were rescued, including the injured. Two were severely burned and were initially unconscious.
The injured crewmen have been receiving medical treatment on an Antarctic-bound U.S. research vessel with medical staff and facilities.
Weather and other factors will determine when the ship and plane rendezvous at McMurdo base. New Zealand's rescue coordination center estimated the plane would return with the injured crewmen to Christchurch late Friday morning New Zealand time.
The burning boat will be towed from Antarctica to minimize the environmental impact.
Posted by Unknown at 10:55 AM