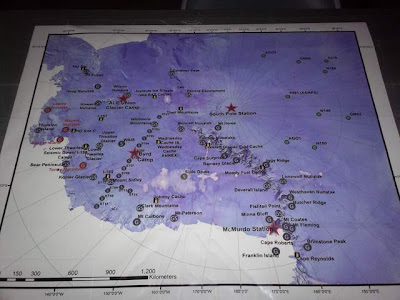 I'm at this camp called Byrd. My team and I are here to setup the
internet. On the map we are the left bottom star out of the four stars. We
are just about as far from McMurdo Station as the South Pole is. South
pole is about 4,000 feet higher in elevation though. The people here are
awesome, some of them have been here for up to three weeks with nothing
but iridium phones and a not quite setup HF radio. We came in to setup a
satellite data system for them and for moving travese, which is basically
a caravan on tractors heading to the three deep camps in the vicinity.
We're also setting up a proper HF setup, VHF and air to ground aerials.
This was a great job because at the end of the day everyone got their camp
email and instant message addresses and finally were able to contact
everyone they wanted. No more dropped iridium calls and waiting for the
handset to be passed around!

There are some sacrifices to camp life. We have no permanent building so
everything is in rac tents, which are actually pretty warm and cozy. Most
people live off to the side in tent city, which are rows of mountain
tents. Those tents are home to camp staff and grantees for up to two
months. No heating, so we got sub zero bags and mats. The food here is
pretty good, Rob and his two sous chefs, Betsy and Natalie are incredible
chefs. And nothing will work without Keith's hard work on the heavy
machines. Katja, the byrd in charge and Tony, keep everything in order. We
melt snow for water, but we have kuma stoves to keep the rac tents warm
and also some coleman heater/pumps for showers. You can take a pretty
satisfying shower with about 2.5 gallons. Everybody has to pitch in, when
we have downtime we help wash dishes and shovel a lot of snow. Yesterday I
probably moved about 20 gallons of water and 3 50 gallon trash cans of
snow.

The reason we're all here to is support or conduct science. The first
flight of grantees came in on our flight, they were Pole Net people who
have seismometers buried out in the snow. They came down here to check up
on their stations. In addition we also serve as a fuel stop for planes
going farther out. We also support a twin otter airplane that will be used
to do surveying out here.