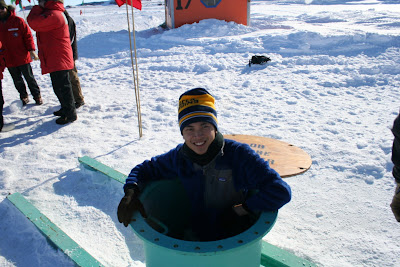 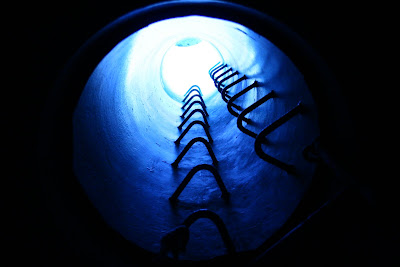 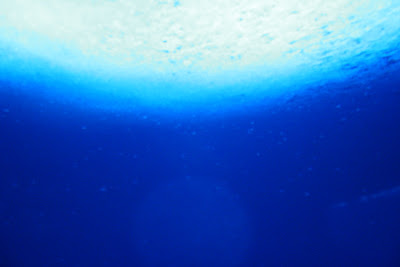 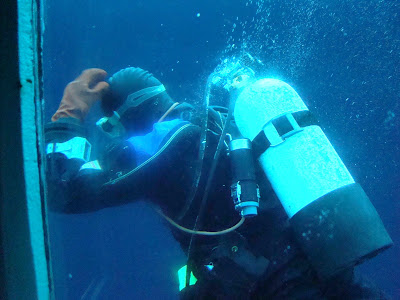 Its my day off so a couple people and I went to the Observation tube. A narrow tube that's sitting out on the ice next to a Diving Hut 19. The tube extends down into the ice and at the bottom is a bell with windows so that two people can climb in and see whats under the ice. What's funny is that we are all wearing overalls and bibs so we look like Mario Brothers popping in and out of pipes. My bearded companion Evan from Denver is a dead ringer. All he needed was a red hat. Its like the ice world level in the game.

The third picture is a shot up at the bottom of the sea ice. There is a bunch of krill out there and also some salt stalactites forming down from the ice. The last picture was taken by Ed, my roommate. While he was in the tube this diver flashed him with his strobe and surprised him from across the glass. Ed freaked the F out but got this shot. The divers were collecting bio samples for the scientist who was anxiously waiting in the dive hut. The dive hut was actually nice and cozy, although it smelled bad because in the off season a baby seal had apparently swam up the dive hole, puke and peed all over the place and took off. Must have swam in from the local bar Ghallegars.
Posted by Unknown at 1:29 AM