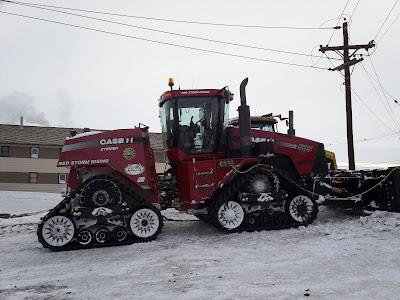 A tractor made by Case. The real adventure in Antarctica is in the traverses. Many countries have coastal stations along the ice shelf, but there there are many others along the interior on the Plateau. We have the South Pole Station, then is also Vostok, a Japanese station and some others. We resupply the South Pole with Basler and ski equipped LC-130 aircraft. Recently we have also been using overland traverse vehicles to resupply them. The other stations like Vostok do an overland traverse as well since their air assets are not as extensive as ours.

This year there will be two traverses to resupply South Pole Station comprised of haulers like these manned by 10-12 men dragging hundred of thousands of gallons of fuel in fuel bladders as well as pallets and living pods. Last year it took  one of the teams 82 days to read the South Pole. They got caught in a storm. Along the way they will drive over sea ice, survey crevasses to make them passable and climb the nearly 10,000 feet to South Pole's elevation. They will be mostly cut off except for Iridium phones and very limit internet. Along the way they will get to see and set foot on parts of this world that only a handful of men have done. One of them said that if there were pine trees here he would cut them down and build a cabin and stay.

The traverse is quite a technical feat as well. One of the vehicles carries radar mapping equipment to map out the crevasses and they have an engineering team that have optimized the operation by disposing of sleds in favor of dragging the bladders to reduce friction. They also switched to black bladders as they absorb more solar energy which translates to more heat to overcome the ice stiction. There is also a group from Carnegie Mellon that is working on automating the tractors. That way the traverse can have one operator with trailing tractors following the lead tractor. The train can then operate around the clock by having the operators work in shifts.

The most important thing the traverses haul up is fuel and compared to LC-130 flights they claim to deliver 1 gallon of fuel for every .6 gallon of fuel burned. In comparison, bringing fuel to the South Pole by air burns 1.2 gallons for every gallon delivered. So its pretty neat considering they are pushing the limits of human mental, physical endurance and are pushing technical envelopes.